Book: Murder in the City of Liberty

Hamish DeLuca and Regina “Reggie” Van Buren have a new case—and this one brings the war in Europe dangerously close to home.

Determined to make a life for herself, Regina “Reggie” Van Buren bid goodbye to fine china and the man her parents expected her to marry and escaped to Boston. What she never expected to discover was that an unknown talent for sleuthing would develop into a business partnership with the handsome, yet shy, Hamish DeLuca.

Their latest case arrives when Errol Parker, the leading base stealer in the Boston farm leagues, hires Hamish and Reggie to investigate what the Boston police shove off as a series of harmless pranks. Errol believes these are hate crimes linked to the outbreak of war in Europe, and he’s afraid for his life. Hamish and Reggie quickly find themselves in the midst of an escalating series of crimes that seem to link Boston to Hamish’s hometown of Toronto.

When an act of violence hits too close to home, Hamish is driven to a decision that may sever him from Reggie forever . . . even more than her engagement to wealthy architect Vaughan Vanderlaan.

Rachel McMillan is a keen history enthusiast and a lifelong bibliophile. When not writing or reading, she can most often be found drinking tea and watching British miniseries. Rachel lives in bustling Toronto, where she works in educational publishing and pursues her passion for art, literature, music, and theater.

An Excerpt from Murder in the City of Liberty

A New Haven Van Buren ought to have perished an old, wealthy woman, tendrils of snow-white

hair falling around a satin pillow, comforted in the knowledge that she would be interred in the family plot, her soul destined for paradise—not with water up to her nose, choking as it lapped in and out like a tide over her chattering teeth. But a New Haven Van Buren also might have had the propriety to insist upon the use of her given name and not the “Reggie” she so preferred. The Reggie she was just hearing now in a rather frantic yet familiar voice.

She treaded poorly, her arms feeling like gelatin, her form rather lacking the swimming skills she had learned informally alongside her family’s schooner on Regatta Day. Reggie strained to rise above the lapping water. She took turns treading and raising herself as high up on her toes as she could. Rotating and wondering why she failed to complete the ballet classes her parents enrolled her in as a child. Standing on tiptoe might have added inches to her height and allowed her to clear her mouth of the water. As it was, her calf muscles strained. She said something that came out in a series of bubbles before glugging, rising upward, and noticing for the first time how the fog from her icy breath rippled over the water. If she couldn’t understand herself, how would he?

“S-slipped,” she said again, trying to make him out in shadow. “H-Hamish.” She tried again. Funny, usually he was the one with the stutter. Hamish DeLuca with the stutter and the bit of a handshake and that one pesky dimple and those big blue eyes. Her own eyes fluttered. Maybe she would never see him again. She would just slip under the water and rest her heavy eyelids. She blinked until a stream of torchlight buttered the dark walls, crystallizing the percolating water drips around her, and then the figure of her rescuer, whose blue eyes looked even more brilliant than usual in the eerie glow of the flashlight.

Hamish dropped to his knees. “Take my hand.”

“This didn’t turn out as I expected,” she chattered.

“Reggie, we don’t have much time.” His voice rippled as he looked frantically at her and then over to the grille she had stared at since she got into the mess, watching the water level rise and fall and rise and fall until it made her dizzy. She clung to his hand a moment.

“We should have gone with plan B.”

Hamish growled. “We didn’t even have a plan A.”

“You’re my hero, Hamish.” She patted his hand with her icy one. “It was so nice of you to come.”

Hamish said something she was altogether certain she had imagined in her half-frozen and very soggy state. And then, of course, he recklessly jumped in to get her.

Oh. My. Word. I thoroughly loved every second spent with Reggie and Hamish in this fantastic murder mystery. Murder in the City of Liberty is SO, SO good. The plot is insanely fast paced and highly engaging. Hamish and Reggie are outstanding protagonists. The chemistry between the two — it’s a delicious blend of hope, romance, and tension. It kept me furiously turning pages well into the night! And the history. I learned so much about 1940s Boston and the political climate in the early days of WWII. Murder in the City of Liberty has a depth and complexity that avid murder-mystery readers will not want to miss!

When I fell in love with my husband, I don’t believe I had one clue as to what true love really is. I felt in love. When I looked at him my heart would flutter and I would go a bit weak in the knees. And I definitely had glorious expectations that only he could fulfill — the happily-ever-after, white-picket-fence, married-for-50+-years kind. These were the kind of feelings I knew only he could inspire. So I must have been in love, right?

Wrong! I went into my marriage with my eyes so firmly shut to reality. Love isn’t a feeling. As one of my favorite pastors says, “Love isn’t glandular.” In the novel, it is clear that Reggie and Hamish have deep feelings for one another. But Reggie is hesitant to admit her that feelings are love. Her biggest issue is how she has built Hamish up in her head. To Reggie, Hamish is the perfect man — a knight in shining armor. He is strong, intelligent, dependable, stable, kind, and selfless. And, she knows he loves her with his whole heart. But there is a moment where Hamish makes a grave error in judgment. Reggie realizes that Hamish is human just like everyone else, and she gets mad at him. The proverbial rose-colored glasses have been slapped off her face, and she now sees Hamish for who he truly is, the good parts and the bad. This is essentially what happened to me too. Six months after we said, “I Do,” life took a turn for the worse and I realized I didn’t really know the man I had married. In retrospect, I don’t think he realized the women he had married either. In one very bad moment all of my notions about love and marriage were stripped from me and what I was left with was real life. I didn’t want real life. I wanted my expectations and dreams. Reggie becomes angry with Hamish because she didn’t want real life either. She wanted the dream of Hamish that she had concocted.

Murder in the City of Liberty is a wonderful story, and I highly recommend it. I am going to miss my time with Reggie and Hamish. Book 3 cannot come fast enough for me!

I received a review copy of this novel in eBook form from the publisher via NetGalley and Celebrate Lit. In no way has this influenced my review. The opinions expressed in this review are my own. 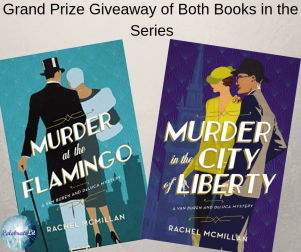 To celebrate her tour, Rachel is giving away a grand prize of both books in the series!!

The Power of Words, June 12

Through the Fire Blogs, June 14

Have A Wonderful Day, June 16

For Him and My Family, June 21

6 thoughts on “Murder in the City of Liberty (2019) — A Celebrate Lit Tour: A Excerpt, My Thoughts, and a Giveaway”