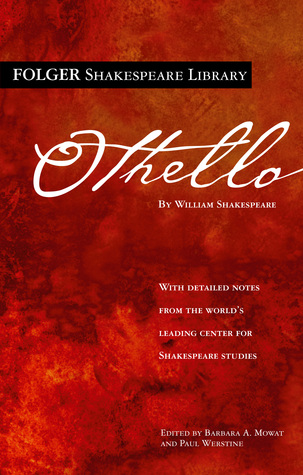 Typically, I teach Romeo and Juliet to my English 9 students and Hamlet to my 12th AP Lit kiddos. About a couple of years into my teaching career, I decided that I would teach Romeo and Juliet to my Regular English 9 kids, but I would teach Othello to my Honors 9 students. That was a rookie mistake on many levels, but it did produce one of my most favorite teacher memories to date.

I had a student named Shannon this particular year I got the crazy idea to teach Othello to 14-year olds. Shannon was a quiet volcano. She was totally respectful and responsible, and she was typically very quiet. There could be days that would go by and I wouldn’t hear a peep out of her. But when something got under her skin, Shannon just had to explode with her emotions and thoughts. When I pulled out Othello for my Honors 9 kids that year, all of my kids groaned and whined, except Shannon. Shannon was thrilled. As we read the play, Shannon became one of my most vocal kids. She absolutely loved the play. She hated Iago. She was SHOCKED a black man was the protagonist. And, she was completely dumbstruck by the evilness and craftiness of the villain’s plan against the main characters. To this day, years and years later, Shannon will message me on FB just to tell me she loved that play so much. I get a kick out of it every time. Othello is a masterpiece of a play, but I will always remember it because of my amazing student, Shannon.

In Othello, Shakespeare creates a powerful drama of a marriage that begins with fascination (between the exotic Moor Othello and the Venetian lady Desdemona), with an elopement, and with intense mutual devotion that ends precipitately with jealous rage and violent deaths. Shakespeare sets this story in the romantic world of the Mediterranean, moving the action from Venice to the island of Cyprus and giving it an even more exotic coloring with stories of Othello’s African past. Shakespeare builds so many differences into his hero and heroine—differences of race, of age, of cultural background—that one should not, perhaps, be surprised that the marriage ends disastrously.

But most people who see or read the play feel that the love that the play presents between Othello and Desdemona is so strong that it would have overcome all these differences were it not for the words and actions of Othello’s standard-bearer, Iago, who hates Othello and sets out to destroy him by destroying his love for Desdemona. As Othello succumbs to Iago’s insinuations that Desdemona is unfaithful, fascination—which dominates the early acts of the play—turns to horror, especially for the audience. We are confronted by spectacles of a generous and trusting Othello in the grip of Iago’s schemes; of an innocent Desdemona, who has given herself up entirely to her love for Othello only to be subjected to his horrifying verbal and physical assaults, the outcome of Othello’s mistaken convictions about her faithlessness.