Out of the war and into another, Captain Lord Anthony Hargreaves finds the politics of romance to be as uninviting a battle as the one that nearly cost him his life in Badajoz, Spain.

Wounded both mentally and physically from the Peninsular War in 1812, Anthony returns home to find that his older brother has died, placing Anthony next in line to inherit the estate. But he’s not ready for such responsibilities. And when Anthony’s dying father pleads with him to marry and produce an heir to preserve the family title, it nearly sends Anthony over the edge; nevertheless, he dutifully faces a long line of hopeful young ladies who await him. No one grabs his attention, though, like Amelia Clarke, his mother’s stunning companion, who is off-limits for the earl. But when Anthony unwittingly puts Amelia in a compromising situation, he dedicates himself to protecting her reputation.

But the horrors Anthony faced while away from home have left him feeling broken and tormented. And Anthony finds himself drawn to Miss Clarke, the only one who can chase away his demons, but he must overcome the hostility of a society driven by class, a jealous duke bent on revenge, and himself—for could Amelia ever really love a haunted man?

The Earl’s Betrothal by Karen Tuft is a superb Regency novel that I thoroughly enjoyed. This is the type of story one reads because she wants to escape from reality, and in today’s world, boy, do I crave fictional worlds to escape into! I found so much to love about The Earl’s Betrothal. The characters are sweet and endearing. Amelia is all that is good and innocent, but she’s also strong, smart, and independent. I very much appreciate that she is not afraid to stand up for herself and for what is right. And, I really love how Amelia is able to see past people’s exteriors to their true hearts. Anthony is my favorite type of hero — the protector! Anthony is a true leader, but like many leaders, he often takes the burdens of others onto himself so others suffer less. His time in the military has scarred him emotionally and mentally, and he has a lot of demons to work through. While I hate human suffering in any form, I do have to say I found Anthony refreshing because he is such a noble and honorable character. My favorite aspect of his character is how he cares for Amelia even though her social standing is well below his. I love this because unlike most people in Anthony’s social circle, he is able to recognize Amelia’s true value. So, while there are plenty of sweet and steamy kisses that make the reader’s knees weak in this novel, what I found the most romantic is how genuine Anthony’s feelings for Amelia are. 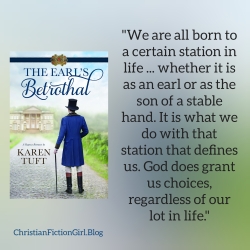 There is so much more to love about this novel. The plot is excellent. I was engaged the entire read, and there are even a couple of moments where I gasped audibly because I just did not see certain things coming. The pacing is also excellent as this is one of those novels I read late into the night because I was unwilling to put it down. I also very much appreciate the timely and thoughtful themes weaved throughout the narrative. All in all, The Earl’s Betrothal is a story I highly recommend. If you are a fan of well-crafted Regency stories, then The Earl’s Betrothal is definitely the book for you.

I  purchased an eBook copy from Amazon on December 10, 2019, to read and review. In no way has this influenced my review. The opinions expressed in this review are my own.