Has your life ever taken an unexpected turn, leaving you feeling hurt and stuck? In The Bathsheba Battle, Natalie Chambers Snapp helps women find healing and hope when things haven’t gone as they had planned. Bathsheba, typically misrepresented as an adulteress, is one of the most misunderstood women in the Bible. Despite an unexpected turn in her life, which resulted in tragic circumstances beyond her control, there are glimmers of hope in her story. By studying her life, readers will find healing from their own painful pasts and hope for living the free and full lives God intends. 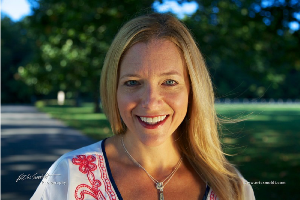 Natalie Chambers Snapp is an author, blogger, and speaker known for her refreshing authenticity and practical approach to life and God’s Word. Not choosing to follow Jesus until the age of twenty-seven, she is passionate about sharing the grace, mercy, and truth of God’s love with others “regardless of your track record.” Her transparency and humor endear her to women of all ages.

Snapp is the author of the book Heart Sisters: Be the Friend You Want to Have, Becoming Heart Sisters: A Bible Study on Authentic Friendships and The Bathsheba Battle: Finding Hope When Life Takes an Unexpected Turn. She has written for various blogs and online devotionals, including Proverbs 31.

Snapp lives in West Lafayette, Indiana with her husband and their three children.

Q: You describe Bathsheba as one of the most misunderstood women in the Bible. How is she typically misrepresented?

Bathsheba is often portrayed as the adulteress—as though she was a vixen with the intent to tempt David and hopefully, take her on as his wife. However, the fact remains that she was a victim of David’s own desires and paid a very dear price for his sin. Sadly, victims can sometimes be blamed and in the case of Bathsheba, that’s exactly what happened.

Q: What were some of the tragic circumstances that Bathsheba found herself in that were out of her control? How can we relate to her story today?

First of all, some commentaries claim Bathsheba was trying to entice David by bathing in the courtyard of her home. However, during the time in which Bathsheba lived, indoor plumbing didn’t exist! Therefore, most families had a basin in the courtyard for bathing purposes. When David saw her bathing, she was obeying the cleansing ritual required of women after monthly menstruation. She was not trying to entice David—she was simply following the rules of her culture! How would she even know David was going to be walking on his rooftop at the precise moment she was bathing?

When David saw Bathsheba, he was immediately impressed with her beauty and summoned her to his palace. During those days, when the king summoned you to the palace, you did not have a choice, you went. So off Bathsheba goes to meet David and once there, they have sex. We have no way of definitively knowing if David assaulted her, but she did go to his palace against her will. For that reason, we can speculate that was a likely possibility. Bathsheba became pregnant which is when things start to go off the rails!

David tries to hide his sin by summoning Bathsheba’s husband, Uriah, one of his most valuable warriors, home from the war (which is where David was supposed to be as well). Once Uriah reaches the palace, David proceeds to feed him a large meal and encourages him to drink a lot of wine so he will go home and have sex with Bathsheba. Problem solved! He can then pass his child off as Uriah’s, and no one needs to know about his sin. However, David failed to consider the fact that Uriah was a man of honor and refused to visit his wife when his men were still waging a war. Instead, he slept on the front porch of the palace with the servants. David tried a second night to get Uriah to visit his wife, but Uriah refused.

At this point in the story, we can see how sin will take you further than you ever wanted to go. Instead of confessing and coming clean to everyone, David orders Uriah to the frontlines of the battle, and of course, he is killed. Now, Bathsheba was possibly raped by the king, pregnant, and her husband is dead. All these things were out of her control.

After Uriah’s death, David takes Bathsheba as his wife. However, the restitution of David’s sin is the life of the child Bathsheba was carrying. Soon after the birth of David and Bathsheba’s son, the infant died. We see Bathsheba as a grieving mother, another event out of her control.

I think so many people can relate to Bathsheba’s story because 1) suffering happens to all of us and 2) sometimes, our suffering is the result of someone else’s actions and choices. In no way should we remain victims, but I think Bathsheba’s story is God’s way of telling us that He sees us, understands our pain, and is the Ultimate Justifier.

Q:  Can you share about a hardship or disappointment in your own life that provided the inspiration to write The Bathsheba Battle?

Absolutely! When I was in my late twenties, I was married to a man with a drug problem, but I did not know it. As many who have loved addicts understand, there are often behaviors corresponding with addiction that are not healthy for a young marriage and therefore, we divorced. Two months after I filed for divorce, my father, who was in and out of my life due to his own addiction issues, passed away unexpectedly.

Life had definitely taken a very unexpected turn and was not at all going the way I had planned. It was a dark season, and yet also the very season in which I became a follower of Jesus. My deconstruction led to my reconstruction. I have been remarried for fifteen years and have three beautiful children; however, periods of suffering have also been peppered throughout those years as well. Suffering is often cyclical and that has been true of my life!

Q: Explain how transformation happens during renovation. Where does renovation take place?

Q: Do we always have the ability to choose how we respond to our situation? Why is this such a significant choice, especially when we must endure a consequence of someone else’s sin?

Yes, I believe we do. We can’t always control what happens to us, but we can always control how we will respond. Living life as a victim will ultimately make you feel powerless, depressed, and distrustful of people. It will lead to a life of bitterness, resentment, and anger. On the other hand, when we respond to our trauma with a humble heart and a willingness to be molded by our suffering, we feel empowered, strong, and able to help others when their time of suffering emerges. When we choose to live as victims, we give others power over our lives. When we choose to live as survivors, we understand that we possess the power ourselves.

Q: How does your study on Bathsheba shift from part one of the book to part two?

In Part One, we discuss the byproducts of our suffering: fear, shame, anger, and comparison. In Part Two, we look at how to overcome these negative emotions and live empowered and with hope.

Q: What does Bathsheba’s story teach us about forgiveness?

We don’t really know about Bathsheba’s forgiveness process because it’s not discussed in the Bible. However, we do see her stand before David in 1 Kings 1 with an empowered and confident voice that exhibits love and respect towards her husband. Perhaps somewhere during the course of their marriage, Bathsheba made peace with her circumstances—she chose her response and not to live as a victim.

Not living as a victim involves forgiveness and yet, this does not mean she might not have felt like a victim for a while. It doesn’t mean that she didn’t feel shameful. And it doesn’t mean that she didn’t grieve the loss of the life she thought she might have. It does, however, indicate that she chose to keep moving forward without allowing her grief and shame to negatively impact who she ultimately became. A woman who is victorious over suffering is the most beautiful and inspiring to us all.