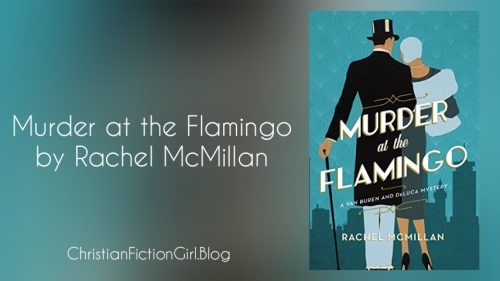 Hamish DeLuca has spent most of his life trying to hide the anxiety that appears at the most inopportune times — including during his first real court case as a new lawyer. Determined to rise above his father’s expectations, Hamish runs away to Boston where his cousin, Luca Valari, is opening a fashionable nightclub in Scollay Square. When he meets his cousin’s “right-hand man” Reggie, Hamish wonders if his dreams for a more normal life might be at hand.

Regina “Reggie” Van Buren, heir to a New Haven fortune, has fled fine china, small talk, and the man her parents expect her to marry. Determined to make a life as the self-sufficient city girl she’s seen in her favorite Jean Arthur and Katharine Hepburn pictures, Reggie runs away to Boston, where she finds an easy secretarial job with the suave Luca Valari. But as she and Hamish work together in Luca’s glittering world, they discover a darker side to the smashing Flamingo night club.

When a corpse is discovered at the Flamingo, Reggie and Hamish quickly learn there is a vast chasm between the haves and the have-nots in 1937 Boston—and that there’s an underworld that feeds on them both. As Hamish is forced to choose between his conscience and loyalty to his beloved cousin, the unlikely sleuthing duo work to expose a murder before the darkness destroys everything they’ve worked to build.

Murder at the Flamingo is the first novel I’ve read by Rachel McMillan and, boy, am I glad I read this book. What a fun ride! Reading this novel is like stepping into a 1930s RKO masterpiece. I enjoyed everything about this book: the sense of nostalgia, the many references to classic films and actors/actresses I adore, the setting and how it becomes a main character in its own right, many fabulous characters who endeared themselves to my heart almost immediately, and a tremendously engaging plot! Murder at the Flamingo is a definite #MustRead!

Hamish DeLuca is my new most-favorite hero!!! I know what the word charming means now that I have met Hamish DeLuca! He may be one of the most authentic and realistic characters EVER crafted. From his very real battle with a nervous condition to his innate misunderstanding of who he truly is as a man, Hamish is the real deal. He is genuinely intelligent, considerate, and handsome. Hamish is a leading man who sees himself as the supporting actor because he believes his flaws are just too big to see past. Honestly, this is a good thing because it allows Hamish to be the hero every girl really swoons for: he’s masculine (no doubt about it!) but he’s also intuitive to a gal’s feelings; he’s intelligent and capable but he’s not cocky; and, he’s protective but not condescendingly so. Here’s an example of Hamish’s excellence, and an action that makes me a little weak in the knees — Hamish and Reggie are sitting down on some stairs in the Flamingo when some not-so-good characters come into the club. They walk over to Hamish and Reggie. Hamish immediately stands in a way that keeps Reggie behind him. He does this to protect her from the criminal-type element coming their way. He doesn’t make this move because he thinks Reggie is a helpless woman. No, he does it because it’s his instinct to protect his dear friend. I absolutely LOVE when a man naturally wants to protect a woman or child. To me, it’s a man acting exactly as God intended men to behave. And this is exactly what Hamish DeLuca is — a man who acts as God desires.

I thoroughly enjoyed the mystery and intrigue, the cast of uniquely crafted characters, the subtle romance (that I hope will flourish in the future), and the respectful discussion on real human issues: mental health, poverty, crime, the beauty of a location, the nature of change, etc, that I found in this novel. Murder at the Flamingo is a fantastic story that I wholeheartedly recommend.

I purchased a copy of this novel in paperback form from Amazon on July 17, 2018, in order to review. In no way has this influenced my review. The opinions expressed in this review are my own.

You have won this giveaway. Thank you for participating. I appreciate your support!

***Please Note: Open to Continental U.S. mailing addresses only.*** One winner will be notified via email at the end of the giveaway and will be announced here on this page. For full giveaway disclosures and policies, click HERE.