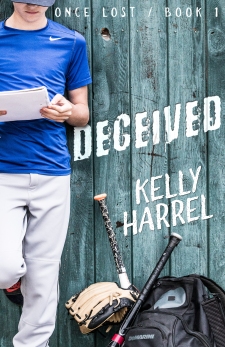 My dream is to be a screenplay writer. When my characters come alive, so do I. Writing is like air to me; take that away and I’ll suffocate.

My dad’s dream is for me to play professional baseball. I hate baseball, but I’m really good at it. And if I play the game right, I can use it to get a full-ride scholarship to my dream film school. That’s the plan, anyway. As long as I don’t mess up.

But the other thing I’m really good at? Messing up. Don’t believe me? The girl who likes me is an atheist. I have to out drink my teammates at parties so they know to take me seriously. I’m pretty sure I’m addicted to pain pills. I made an absolute fool of myself during the most important game of the year.

Hi, my name’s Danny Morton. Welcome to my messed up life and the start of how God saved me.

Kelly Harrel is the author of the Lauren Drake series and its spinoff, the Once Lost series. Convertible rides to the beach with the love of her life, Jeff, are her favorite. She also loves hanging out with her son and daughter, and she adores peppermint mochas. Kelly strives to usher others into a deeper relationship with Christ through her speaking and writing. To learn more about Kelly or to book a speaking engagement, visit www.kellyharrel.com.

I fell in love with Danny Morton when I first heard his voice at two am. His biting remarks made me laugh and cringe at the same time. They also made me jump up to take notes. Maybe because once upon a time I was a sarcastic teen who lived too much in my own mind. Or maybe because I had a lot of questions about God at his age too. Like Danny, I yearned for a close relationship with God even though I felt surrounded by hypocrites.

Yes, I fell in love with Danny from the very beginning. It was impossible not to. His passion is inspiring. Even as young as he is, he has a dream he’s determined to pursue. All he wants is to write, which is also something I can understand.

As soon as I began writing his story, I knew there were a lot of deeper issue to deal with. Being the mother of two teens, I’ve seen firsthand how independent they can be. They have their own ideas, personalities, and desires. Two questions came to mind. Why do teens raised in the church fall into drugs and alcohol and fall away from the Lord? Is there a way to prevent it? Finding no simple answers, I cried out to the Lord to help me understand. I asked Him to give me Danny’s story to teach and inspire others. That’s when not only Danny but his entire family came alive to me.

I thought the most disturbing thing about The Deceived might be Danny’s drugs and alcohol abuse. Yet with each revision of the book, something else became more disturbing—the way his family treated him. This novel became a personal reminder that lukewarm Christianity can destroy those we love the most.

I pray this young adult novel will be picked up by all generations. Parents should examine their own relationship with the Lord, how they treat their teens, and the pressures their teens face every day. My prayer is that teens will find a friend in Danny as well as the determination to recognize and stand against the temptations they face.

One of my favorite scenes in The Deceived is when Danny goes to a party the day after Thanksgiving. Not being a very social guy, he comes up with a hilarious way to identify people. You might need to search different types of trees while you read the scene but you will laugh out loud. While Danny has a lot of great one-liners, the conversations I enjoyed writing the most were those between him and his sister, Lydia. I was blessed with a great relationship with my older brother in our teen years, and those conversations remind me of our late-night talks.

The Deceived will make you laugh, cry, and consider family dynamics and your faith in a new way. And when you get to the last page, remember, there’s more to come.

Once upon a time there was a teenager named Nicole. Nicole was an extreme rule follower. This young girl loved Jesus SO much, but thought the best way to show her love was by following every rule He ever made … and then some. This young girl hated the Prodigal Son story in the Bible. It made her angry every time it was read in church. You see, this young girl had four brothers. Each one a total prodigal. Each one a total rule breaker. Most of the time they wouldn’t get caught by the parental units, but this girl knew exactly what they were doing: partying, illegally drag racing, drugs, alcohol, and sex. They failed in school. They stole money from the parents. Their choices and actions were SO frustrating for this rule-following, Jesus-loving girl.

What drove me the most insane was when my brothers did something slightly positive. In these rare moments they would be praised like crazy and were usually gifted something. But I would come home from my part-time job after a long day at high school to show off my report card (all As and Bs!), or talk about my promotion at my part-time job, or gush over my soccer team winning our latest game to barely receive a “that’s nice dear.” It would drive me insane how unimportant I clearly was even though I was following all the rules and doing what my parents wanted. I hated the Prodigal Son story because I self-righteously hated the prodigal son. I hated that he got the Father’s love even though he didn’t deserve it. I hated that my brothers got the love even though they disrespected and broke most all of our parents’ expectations.

It took me a LONG time to discover and understand that I am a prodigal myself, and that I had become a Pharisee. I wish I could say that I learned the true meaning of the Prodigal Son parable in my early 20s, asked God for major forgiveness, humbled myself, and learned to love my brothers for whom they are, but I didn’t. I’m extremely ashamed to admit that I was in my mid-30s before I realized that Jesus was talking about me in the Prodigal Son parable. It then took me about four years of dedicated Bible study to realize that I had become Pharisaical in my teen years, loving the rules more than God and the people He placed in my life. This steadfast rule-loving of mine made me hard and judgmental. It made me the prodigal. I wanted things my way — the clear-cut, black and white rule way. When I realized all of this about me, I was devastated and embarrassed. For a good minute, I didn’t know how to go to God. How could He not hate me?! And, how was I supposed to go to my parents and brothers? They must have all thought I was the worst kid ever. But then I learned what grace is. I discovered just what it meant for Jesus to take up His cross for me. It meant He suffered the wrath I deserve so I don’t have to. Talk about love and grace! Jesus took my Pharisaical heart and my prodigalness, and made me new. Jesus showed me that I need to love my brothers no matter what. I need to show them love, respect, and grace just as Jesus does for me.

What does ANY of this have to do with The Deceived by Kelly Harrel? Well, it took me a minute to realize, but Danny Morton’s story is a modern-day retelling of the first half of The Prodigal Son parable, and this realization changed the way I see this story. For most of this book, I struggled hard with Danny. I couldn’t see very much to like about him. He plays the victim (which I hate so much!), he’s rude, he’s selfish, and he’s so arrogant it’s ugly. Danny lies and steals from those he should love and respect. And, he is a complete narcissist. BUT, Danny Morton is one of the BEST, most realistic characters I’ve ever read, and he is textbook prodigal. Now I’m definitely looking forward to the sequel to this novel. I need to see how Danny’s story ends. The Deceived is a “to-be-continued” novel that leaves the reader with a ton of unanswered questions. I like this about the book; it definitely makes me want more from this author.

Overall, I recommend this story. It’s well written, fast paced, and highly engaging. It reminded me of my prodigal ways, and my deep need for my Savior, Jesus Christ. This is a story I will be thinking on well after the final page has been read.

I received a review copy of this novel in eBook form from the author via Celebrate Lit. In no way has this influenced my review. The opinions expressed in this review are my own.