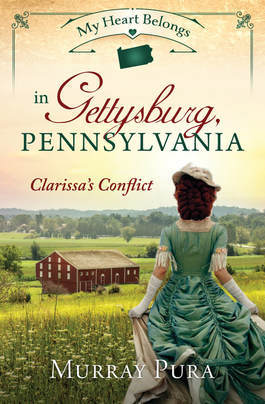 MHB in Gettysburg, Pennsylvania: Clarissa’s Conflict (2018) by Murray Pura is the latest novel in the My Heart Belongs series published by Barbour Books. This novel comes in all forms including eBook, and is 256 pages in length. With a full-time job and a very lively six-year old, this book took me three days to read. I received a review copy of this novel in paperback form from the publisher, Barbour Books. In no way has this influenced my review. The opinions expressed in this review are my own. I give MHB in Gettysburg, Pennsylvania: Clarissa’s Conflict 4 STARS. This novel is a Historical Christian Romance.

When War Reaches Clarissa’s Back Door, the Trustworthy Become Even Fewer.

Journey into Gettysburg, Pennsylvania, of 1863 where Clarissa Avery Ross lives a full life. By day she is the daughter of a respectable shoemaker being courted by seminary student Kyle Forrester. But by night she is a conductor on the Underground Railroad, working with a mysterious man called Liberty. She would like to share her work with Kyle, but he refuses to enlist when the war breaks out. How can she remain true to a man being labeled a coward? When the war comes to her back door in an epic battle, the greatest challenges to her faith and love are yet to come.

Overall, I have really enjoyed the novels that I’ve read in the My Heart Belongs series, and I do highly recommend them. Clarissa’s Conflict is a good read, too. I found the writing to be very well done, and the research impeccable. Pura does an excellent job of drawing the reader into the narrative, and creating a story line that forces pages to fly by! There are some moments in this novel where I refused to put the book down because I absolutely had to find out what happened next. If you are a fan of Civil War novels, this book is definitely for you!

Pura does a FANTASTIC job illustrating what it was like to be a conductor on the Underground Railroad and a soldier during the Civil War in America. These moments were some of the best and most terrifying in the story. My favorite aspect is seeing the portrayal of such brave and courageous men and women. Regardless of what could happen to them, many men and women sacrificed their own safety to make sure slaves were freed from slavery. I love the dedication to doing the right thing no matter the consequences. I was terrified for Clarissa the whole time, but I thought her admirable. And, the depiction of the Battle of Gettysburg is incredibly well done. I felt like I was right there on the battlefield with Clarissa and Kyle as they fought against the Confederate soldiers. I could smell the loamy dirt, the blood, the gunpowder. I could hear the horses neighing, the soldiers screaming, the guns firing, the cannons exploding. It felt so realistic reading those parts.

While I did very much enjoy the story, I struggled a little with Clarissa’s character. I found her rather annoying. She is bombastic, self-centered, and bratty. Sometimes, it feels like she is channeling Katherine Hepburn’s sauciness, and sometimes it feels like she is a Blanche Devereaux in nature. I love Katherine Hepburn, and I adore the Golden Girls, but it just didn’t work for me in this book. Clarissa doesn’t feel like a 19 year-old woman from the 1860s; rather, she reminds me of my teenagers today in my 12th grade English class. Her actions and her personality are SO 2018. I know teens are teens no matter the era, but American society in 1860 had certain standards for their women that I see in every female character in this book EXCEPT Clarissa. My biggest issue with Clarissa is how she views fighting for what is right. I love her hatred of slavery. I even agree with her hatred of slavery. But Clarissa believes if a person doesn’t fight for a cause like she fights for a cause then the person is weak and worthless. I detest this line of immature thinking. And, because she thinks like this, there is a moment where Clarissa treats someone abominably. This moment in the story completely ruined Clarissa for me. It made me realize that if Clarissa were a real person today, I would not want to be around her.

Please don’t be discouraged away from this book because of how I feel about the main character. It could be that I deal with teens EVERY DAY OF MY LIFE, so I’m a little jaded! The depictions of the Underground Railroad and the Civil War battles are SO well written that they make this book an awesome read. I actually re-read passages because they were so good — the hold-your-breath and sit-on-the-edge-of-your-seat kind of good. It is clear that solid research went into this novel. Overall, I do recommend this novel. Like I said above, Pura really knows how to tell a great War story. 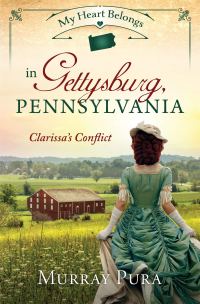