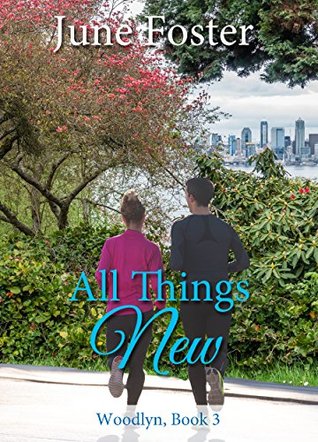 All Things New (2018) by June Foster is the third book in her Woodlyn series. This book comes in all forms including eBook, and is 203 pages in length. With a full-time job and a very busy six-year old at home, this book took me two days to read. I received a copy of this novel in eBook form from the author. In no way has this influenced my opinion of the story. All opinions expressed in this review are my own. I give this book 4.5 STARS. All Things New is a Contemporary Christian Romance.

The fraternity co-ed who coaxed Jillian Coleman upstairs that night is no more than a blur in her memory, but the consequences will haunt her forever. Ten years later, Riley Mathis, now a Christian, can’t tell Jillian he’s the father of the child she aborted. The truth will destroy them.

All Things New by June Foster is an engaging and timely story. Both Riley and Jillian deal with BIG issues that are relevant to today. I found both the hero and heroine of this novel to be well written and realistic. And, the plot of this story is so engaging the pages flew by! I very much enjoyed my time reading this book.

One aspect that I really appreciated in this book is Riley’s character development. At the beginning of All Things New, I was not a fan of his character. Nothing is more a turn off to me than a grown man behaving and thinking like a teenage boy. It is SO unattractive. To me, Riley is not hero material at the start of the story. I found him to be lazy, incapable, and self-focused. He doesn’t seem to have a real drive, and his confidence is in the dumps. But as Riley focuses more on God and His Word, and begins to focus on others and how best he can serve his fellow man, Riley slowly becomes the man God wants him to be — a heroic man! Riley’s change in character is a great reminder to me. My walk on this earth is NOT about focusing on me. It should be about focusing on what God calls me to do for others. This character reminder alone made reading All Things New totally worth it. I love when books force me to evaluate my heart.

There are really great scenes in this story where Riley leaves notes of encouragement to Jillian. I found it super sweet, and one of the note moments led to my most favorite part of the book. In one note, Riley references Jesus and His ability to calm storms. Riley then tells Jillian that God has her. That He is directing her paths no matter what it may feel like in the moment. It is after reading this note that Jillian realizes, “God didn’t leave her like an orphan in this world to stumble around blindly.” I 1000% loved this realization. I’m going to be honest, there have been several times in my life where I believed God wasn’t around. In those times I did feel like God had abandoned me to figure things out on my own. But this is so far from the Truth. God doesn’t see us as “tossed-to-the-street” orphans. We are His babies. To prove He cares deeply for His children He has left us His Word and He allowed the sacrifice of His perfect Son so that we can communicate and worship Him daily. God is SO, SO good to His kids. Unfortunately, too many of His kids refuse to seek Him out in His Word and though prayer, but rather prefer to yell at Him for abandonment. If we’re really honest, we abandon Him. I really appreciated Jillian’s realization that we humans are not tossed aside by God. God is our permanent stronghold. He is our Abba, and we are His kids! We just have to stop focusing so hard on ourselves in order to see and hear God.

I am very blessed to have read and reviewed All Things New. I enjoyed the engaging plot line, the endearing and realistic characters, and the excellent Biblical lessons that I found to be timely and great reminders. I highly recommend this very good novel!