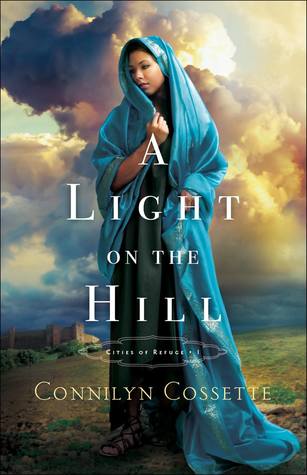 A Light on the Hill (2018) by Connilyn Cossette is the first novel in her Cities of Refuge series. This book comes in all forms including eBook, and is 323 pages in length. With a full-time job and a very busy six-year old at home, this novel took me several days to read (it was an insanely busy week this week!). I purchased a copy of this novel to review from Amazon on January 30, 2018. All opinions expressed in this review are my own. I give A Light on the Hill 5+++++ STARS. This novel is Biblical Christian Fiction.

Though Israel has found relative peace, Moriyah has yet to find her own. Attempting to avoid the scorn of her community, she’s spent the last seven years hiding behind the veil she wears. Underneath her covering, her face is branded with the mark of the Canaanite gods, a shameful reminder of her past captivity in Jericho and an assurance that no man will ever want to marry her.

When her father finds a widower who needs a mother for his two sons, her hopes rise. But when their introduction goes horribly wrong, Moriyah is forced to flee for her life. Seeking safety at one of the newly established Levitical cities of refuge, she is wildly unprepared for the dangers she will face and the enemies — and unexpected allies — she will encounter on her way.

Connilyn Cossette is, without a doubt, one of the best Biblical fiction authors of our time. Her writing is flawless, her research is tremendously in-depth, and her ability to weave a fascinating and realistic story every time sets her apart. Connilyn Cossette has definitely been blessed by God with immense writing prowess, which is deftly illustrated in her fourth novel, A Light on the Hill.

When I was in prayer this morning asking God for guidance in writing this review, I was immediately flooded by images of the one scar I have that has bothered me. I actually have many scars — life has been a bit rough on me — but I see the majority of my scars as war wounds. They remind me of all that God has brought me through. This one scar does remind me of what God has done to save me, but it also reminds me every now and then of my shortcomings as a woman. The scar I’m talking about is my emergency c-section scar. I won’t get into the gory details about what happened on the day my daughter was born, but I will tell you that on the day Bella was born I was told that I could NEVER have children ever again. At the time, so many bad, scary things were happening that never getting pregnant again sounded like an exceptionally great idea to me.

I’m actually quite OK that God meant for me to be a mommy to only one child. I know I am super blessed to be Bella’s mommy. But sometimes I see my scar and I’m reminded of my extreme failure as a woman. I cannot carry a baby to term. My own daughter could only make it to 28 weeks. There is a broken timer inside of me that will not allow me to safely get to 40 weeks with a child. The difficult part is that I have been surrounded by highly fertile women my whole life — my grandma had four healthy babies, my mother and aunt had four healthy babies each, and my sister had three healthy babies. I genuinely believed that I would be just like them and follow in their fertile footsteps. But that was not to be.

Why am I sharing this? What does any of this have to do with A Light on the Hill? Moriyah, the heroine of A Light on the Hill, also has a scar that has changed the way she sees and values herself. At the start of this novel, Moriyah has basically self-exiled herself to her home. She is never without her veil, even within her house, and hides from everyone — including God! But at a very crucial point in the novel, Moriyah has a change in perspective. This is my most favorite theme in the whole story.

At one point in her life, Moriyah’s wounded pride and broken spirit convinced her that hiding from everyone was her best option. Moriyah was filled with shame because of her scar and what it represented. Her real self became hidden in plain sight, which let the bad win. She didn’t stand up for herself, ask God what He wanted her to do, or consult with the family He gave her. Instead, Moriyah took matters into her own hands and locked herself away into a tower of her own making believing that God had abandoned her. But she eventually comes to realize that “perhaps it was not Yahweh who had stopped whispering to her heart…but, [rather it was she] who had built a wall” between herself and God (183). As soon as Moriyah changes her perspective, she feels God’s very present presence. It’s the most beautiful moment in the entire book!

This amazing novel asks us readers to consider our own need for perspective changes. For a long while after my daughter’s scary birth, I did feel like a veritable loser of a woman. I truly believed that God had abandoned me and unfairly locked up my stupid womb. All I could feel was a complete and terrorizing sense of fear. And, I hated my scar. I loathed it! But then one day my perspective changed, just as Moriyah’s did. God hadn’t abandoned me. God had absolutely saved me. I should be dead — not one of my doctors could understand or tell me how I survived the night Bella was born. BUT GOD!!! God can explain it — He saved me. Now when I look at my scar I am reminded of His success, of His defeat over death again. God is so good ALL the time, and my scar reminds me of this daily.

This one theme doesn’t even begin to cover the depth that exists within the pages of A Light on the Hill. I have like 22 more marked pages throughout this book that I would love to discuss, but I won’t. Truly, one review could never do this book justice. You have to read this beautiful book for yourself! If you can’t tell, I highly recommend this book. I am so blessed to have read it, and I know you will be, too!