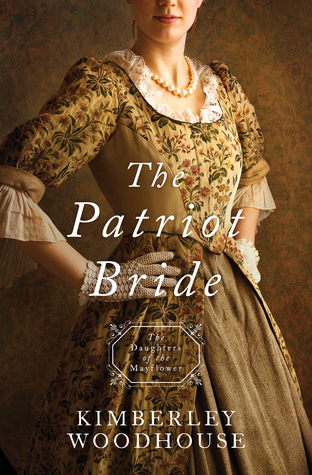 The Patriot Bride (2018) by Kimberly Woodhouse is the fourth novel in the Daughters of the Mayflower series. This book comes in all forms including eBook, and is 256 pages in length. With a full-time job and a very busy six-year old at home, this novel took me four days to read. I received a copy of this book in eBook form from the publisher, Barbour Books. In no way has this influenced my opinion of the story. All opinions expressed in this review are my own. I give The Patriot Bride 4.5 STARS. This novel is Historical Christian Fiction.

Faith Jackson is a wealthy widow, friend of George Washington, and staunch supporter of the Patriot cause. Matthew Weber is friends with both Ben Franklin and his son William, who increasingly differ in their political views; and Matthew finds himself privy to information on both sides of the conflict. When a message needs to get to a spy among the Loyalists, Faith bravely steps up and in turn meets Matthew Weber. Suddenly she believes she could love again. But someone else has his eye on the Faith she portrays in elite social circles. What will Matthew and Faith have to sacrifice for the sake of their fledgling country?

I have enjoyed the novels so far in the Daughters of the Mayflower series, so when The Patriot Bride released I knew I had to read it immediately. Boy am I glad I did. This novel is a lot of fun. The Patriot Bride has well written and relatable characters, an engaging plot line, and fascinating historical detail.

I enjoyed several aspects to this novel. The first being the inclusion of George Washington and Benjamin Franklin as actual characters in the story line. Most of the time in historical novels actual historical figures are merely mentioned one or two times over the course of the story. But in The Patriot Bride, George Washington plays a pivotal part in Faith Jackson’s life. Faith, the heroine of The Patriot Bride, grew up following George Washington around wherever he went. When her entire family dies when she is a very young girl, George becomes Faith’s caretaker. My favorite part of George’s character is how protective a brother he becomes to Faith over the years. And, Benjamin Franklin is a mentor to Matthew Weber, the hero of this story. Franklin’s character is quite hilarious in most of his scenes, as he was in real life. If you have not read The Autobiography of Benjamin Franklin by Benjamin Franklin I highly recommend that you do. It is one of the funniest books I’ve ever read. In real life, Franklin was a hoot!

Kimberly Woodhouse did a FANTASTIC job of capturing the time period. Most notably in how she portrays communication, or rather the lack of communication, in the 1770s in America. I very much realized reading this book just how spoiled I am today. I can contact anyone in my contacts list via text message, phone call, and/or email, and have almost instant communication back. Even our snail mail is amazing. I can order a book from Amazon and two days later I have it in my hands. This absolutely was not the case in 1770s America. Snail mail was just called mail back then! It took as long as it took. By the time one received “news” the news was two months old already. And, if a war was going on…forget it, you probably weren’t getting anything by mail. This communication issue was just a fact of life for these people. Mrs. Woodhouse did a great job of illustrating this.

My final favorite aspect to this novel is the discussion of man’s time vs. God’s time that is weaved throughout. Matthew very much wants to be with Faith. He’s sure she is the one for him, but the timing is off. A war is brewing and he does not think it the appropriate time to marry and start a family. So he puts things off with Faith. This is so true to humans! We all try to control our steps and our paths. We think there is a perfect, right time to get married. We believe there is a perfect, right time to have babies. We humans think we are controlling time. How funny we are. As Proverbs 16:9 (ESV) states, “The heart of man plans his way, but the Lord establishes his steps.” This is why marriages happen when they happen and babies come when they come. God is the boss. If God puts love in your path, it’s God’s time for you to be in love whether there is a war on or not. In his own unique way, Benjamin Franklin’s character reminds Matthew of this unalterable truth. We humans can plan all day long, but God puts us where He wants us to be!

Overall, The Patriot Bride is a read I highly recommend. The characters are endearing, the setting is so well written I felt like I was in Boston during the 1770s, the messages are timely, and the historical detail is rich. If you are looking for an engaging and thoughtful historical fiction novel to escape into, The Patriot Bride is definitely the book for you.