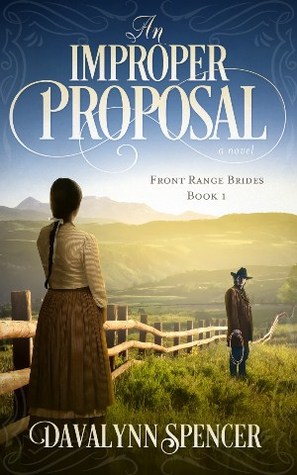 An Improper Proposal (2017) by Davalynn Spencer is the first book in her Fort Range Bride series. This book comes in all forms including eBook, and is 278 pages in length. With a full-time job and a very busy five-year old, this novel took me four days to read. I received a review copy in eBook form from the author through the BookCrash book review group. In no way has this influenced my opinion of the book. The opinions expressed in this review are my own. I give this book 5 STARS. An Improper Proposal is a Christian Historical Romance set in Colorado in 1880.

Mail order bride Mae Ann Remington won’t let circumstances get in her way. When someone else’s greed costs her everything—including her groom—she does the only thing she can in a new town with no money or friends. She asks a stranger to marry her.

Cattleman Cade Parker stops at the bank to withdraw cash for his sister, not find himself a wife. But that’s exactly what happens after a bank robbery leaves a farmer dead and his headstrong bride-to-be making a desperate business proposition.

Convinced he’s gone loco, Cade accepts the spirited young woman’s offer, and they stop by the church before heading to the ranch, his horses, and the herd. He’s soon adding to Mae Ann’s fine cooking skills by teaching her to ride, shoot, and do what he tells her. She manages the first two fairly well, but gets her back up at the third.

Cade struggles to keep his emotional distance from the stubborn gal whose gentle ways start drawing him in. But when a greedy neighbor challenges Mae Ann’s inheritance of her former intended’s run-down farm, Cade and Mae Ann drive to court at the county seat and into the jaws of a deadly storm. Not only must Cade fight to keep his new bride safe, he’s got to keep his heart from stampeding out of control.

Taking on snakes, scoundrels, and second chances is one thing, but falling in love wasn’t part of the deal.

An Improper Proposal is a fantastic read! It has everything a girl wants in a great romance. It’s well-written, the characters are endearing, and the romance builds sweetly. There is quite a bit of tension; not just between the main characters as they are working towards a real romantic entanglement, but also from the villain. The villain is so well written that with each page turned the tension mounts higher and higher. As the reader, I knew the villain would eventually strike, but so much was built up that when he did my heart jumped into my throat! Man, this book is a page-turner!!!

My most favorite character in this story is Cade. He is a perfectly written hero. He is SO kindhearted, strong, and assertive. He is a man’s man capable of almost singlehandedly caring for his cattle ranch. And he has a protective streak a mile wide. His need to safeguard Mae Ann from the very first chapter is endearing. But, my most favorite aspect to his character is his ability to allow Mae Ann to be the woman she is. He never tries to change her to fit what he thinks is the appropriate rancher’s wife. He never makes her feel badly when she doesn’t know something. He just patiently teaches her what she needs to know. And, when Mae Ann is in one of her stubborn streaks, he allows her the independence she wants even when he is worried that independence may get her into a sticky situation. He never tries to control her. Cade sees Mae Ann as a strong, responsible, capable woman and he completely respects her. Oh yeah, and the kisses are pretty darn awesome! Overall, I would rate Cade a pretty swoon-worthy hero.

I really enjoyed reading this story, and I am sad to see my time with Cade and Mae Ann over. But, I am thrilled that book 2, An Unexpected Redemption, releases on April 26, 2018. If you are looking for an excellently written, fast-paced, and highly engaging Christian Historical Western then I highly recommend An Improper Proposal.