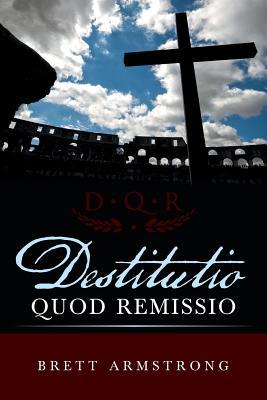 Destitutio Quod Remissio (2015) is a stand-alone novel by Brett Armstrong. This story is available in all forms including eBook, and is 334 pages in length. With a full-time job and a very busy child at home, this book took me four days to read. I received a copy of this novel in eBook form from the author to review. In no way has this influenced my review. The opinions expressed in this review are my own. I give this book 4 STARS. This novel is a Christian Historical novel set in ancient Rome during Diocletian’s reign of terror against Christians.

For decades, Roman Senator Marcus Servius labored to become a wealthy and admired patrician man. But now, his world is shattered. After he is exposed as a Christian during a time of intense persecution, his home, wealth, and prestige are stripped from him. The most painful loss of all is that of his beloved wife, Cassandra. Destitute and wary, Marcus prays he will be delivered from his enemies’ hands as he struggles to realize a new path.

In desperate need of help, Marcus disguises himself and embarks on a dangerous journey to find Benjamin Truvias, the leader of a hidden church and the man responsible for Marcus’s conversion. After Benjamin offers aid, Marcus’s life finally finds needed direction. Yet, the more he helps the church through persecutions, the closer he comes to finding who betrayed him. Caught in a maelstrom of intrigue and deception, should Marcus discover the awful truth of who caused his fall, he must choose between vengeance and forgiveness–a decision that will affect the fate of all the believers in Rome.

Destitutio Quod Remissio is the timeless epic tale of a man’s struggle to rebuild his life amid ancient Rome after he loses everything he loves and his faith is tested in ways he never imagined.

Destitutio Quod Remissio is a thrilling, well-written story. It is the tale of Marcus, a man who rose through the ranks of Roman politics in order to become a very wealthy and admired Senator. But, Marcus was keeping a secret from everyone, including his wife — or so he thought. It turns out, this secret was known, and Marcus’s life would never be the same again. Over the course of the novel, the reader sees Marcus rise from the ashes of his former life, find true meaning and purpose, and help defend and protect the persecuted church in Rome. His most difficult challenge is coming to terms with those who caused his ruination, and moving towards forgiveness rather than revenge. Marcus’s story illustrates a man shedding his human desires and becoming the man God made him to be, a task not easy or simple to fulfill.

What I loved so much about this book is how well Armstrong brought to life Rome in the 3rd century AD. It felt like I was in the story right next to Marcus as he was navigating his way through this perilous and dangerous time. The mob mentality, the brutality of “the games” at the Coliseum, the corruption of the politicians who claimed to be for the people, and the reign of terror felt by all Christians as Emperor Diocletian did what was in his power to exterminate Christianity from Rome…all of this coalesced into a story that is highly engaging and hard to put down. As I read this book, I constantly felt myself holding my breath and being on the edge of my seat. The constant state of fear and not really being able to trust anyone even within the church because of Roman spies sent to weed out Christians from their underground churches, was enough to make me feel a bit of paranoia. You can’t read this book and not see the startling similarities occurring in our world and our country today. If this isn’t enough to keep you on the edge of your seat, Armstrong writes many moments of intrigue, plot twists, and shockers to keep your adrenaline pumping throughout the entire story. You truly never know what’s coming next as you turn the page.

I grew up Catholic and went to Catholic school from 1-12th grades. The nuns often made sure to teach my fellow classmates and me about the lives of the early Christian martyrs. As an impressionable seven year old, I remember vividly the various stories of men and women who stood strong in their faith even though they were being persecuted in the most inhumane and monstrous of ways. To me, they were so brave and courageous. My favorite story is that of a girl named Agnes. I remember Sr. Regina telling the story of a beautiful Roman teenage girl saying NO to an arranged marriage because she had dedicated herself and her body to Jesus as His bride. This marriage would have completely sheltered and protected Agnes from the brutality of the Christian executions. Agnes, however, gave her life willingly to the executioner because she was not willing for one second to compromise herself or her faith in Christ. This executioner, as the story goes, was so struck by Agnes’s bravery and innocence that he was trembling as he brought his sword down upon her innocent neck. This is what Destitutio Quod Remissio is about. It’s a story about being so strong and unwavering in your love for Jesus that not even death stands in your way. This is what Marcus comes to understand — that death can do nothing to one who loves Jesus with his whole being. This story often made me stop and think about my own faith. Am I strong like Marcus is in this novel? Am I strong in my faith like Agnes was in ancient days? Or am I just a scaredy cat? I love when a novel gets me thinking and praying and confessing to myself and Jesus my very real flaws.

Destitutio Quod Remissio is a story I highly recommend. It is not a soft, easy story. It is a hard, contemplative story that holds a mirror up to its readers asking them to truly consider their faith in God. This is a story that will stick with readers LONG after the final page has been read.