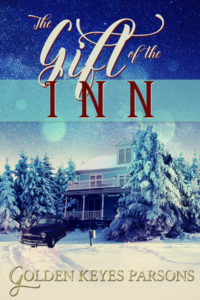 The Gift of the Inn (2017) by Golden Keyes Parsons is a fantastic stand-alone novel. This story is available in all forms including eBook, and is 355 pages in length. With a full-time job and a very busy five-year old, this book took me four days to read. I received a review copy of this novel in eBook form from White Fire Publishing. In no way has this influenced my review. The opinions expressed in this review are my own. I give this book 5 STARS. This story is a Christian Historical Christmas novel set in 1944 Colorado, Texas, and Germany/France during WWII.

Despite her best efforts to go through the motions and the good fortune to have a husband stationed stateside rather than in the midst of the brutal combat unfolding in Europe and the Pacific, Christmas Eve is a less than festive time for innkeeper Naomi Lockhart. It’s been especially hard since she, her husband, Quenton, and their daughters restored her parents’ Colorado boarding house and turned it into a charming inn. Residing in the setting of the tragedy and haunted by a heartbreaking and terrible loss, Naomi can’t help but relive the Christmas Eve so many years ago when her infant child disappeared without a trace.

Gracie brushed aside comments about how little she resembled her parents for most of her life without really understanding why they made her feel so odd. A slip of the tongue by her grandmother brings the discovery that the people who raised her are not her birth parents and acts as a catalyst for the start of a search for her real identity. After a whirlwind romance with a young, Europe-bound GI and subsequent elopement in defiance of her affluent, traditional parents, Gracie flees Texas for Colorado, following one of the few clues that she has about her real identity. She finds herself alone and working as a waitress in blizzard-prone Colorado Springs, Colorado at the end of her pregnancy. Snow bound, she struggles to bring her child into the world as she becomes ever more confident that the innkeeper from across the road, who acts as a midwife of necessity, may hold the answers she seeks. Meanwhile, her wounded husband desperately tries to reach her side.

Set against the backdrop of the Second World War, this final novel from beloved writer Golden Keyes Parsons is an engaging story of love, loss and reunion.

The Gift of the Inn is one of the most engaging, endearing, and emotional novels I have read in a really long time. This story gripped my heart from page one, and ran me through an emotional roller coaster. Several times, I had to stop my reading and grab my child up and hug her hard, or praise God for my husband’s well being. This book definitely reminded me to be grateful for the protections God has placed upon me and my family.

It’s Christmas Eve, 1944, in Colorado Springs, Colorado. Naomi, the main character, has struggled with this day ever since her 9 month old daughter, Julia, was kidnapped 17 years prior. Gracie, 18 years old, 9 months pregnant, and estranged from her parents, is struggling on this day because her husband, Jack, is overseas in Germany fighting Nazis and Hitler, and she hasn’t received a letter from him in a couple of months. Trapped by an intense winter storm, Naomi and Gracie unknowingly (and then, knowingly) help each other through an emotionally rough day. And, let me tell you, this “day” ran my emotions up, down, and sideways. I cried, I cheered, I was angry. Truth be told, I’m still angry at one character 12 hours after having finished the novel — that’s how much this book has affected me.

The absolute best part of this story for me is the excellent Godly message. Naomi has had one of the worst things happen to her as a mother — the loss of her child. She spent years praying to God for guidance, help, answers, resolutions, and peace. But all she has ever met with is silence. So, Naomi stops praying. She never stops thinking about her child, but she just stops praying. And, the meaning behind Christmas dies in her heart. But, on this Christmas Eve day, Naomi really looks at her Nativity scene, and realizes that she has missed the most important aspect of Christmas — Jesus. Christmas is not about getting what I want, it’s about recognizing the intense love God has for me. God sent His perfect Child down to earth in the form of a helpless babe. God did this so that Jesus would grow up and die a sacrificial death so I can have a closer relationship with Him. On Christmas, when we look at our Nativity scenes, it should smack us right between the eyes that the vulnerable baby laying in that manger came to earth to die for us. The best part of this message is that even if we, like Naomi, give up for a season or two or three, God still wants us. He will always wait for us. That’s real grace, and that is the true meaning of Christmas — REDEMPTION! What a lovely, wonderful, truly-needed message.

The Gift of the Inn is so good. SO GOOD!!! And, clearly, there is so much to talk about with this book. If you are looking for a novel that grips you from page one, has really well-written characters, an intense plot line, and a fantastic moral theme, then look no further. The Gift of the Inn is the book for you!