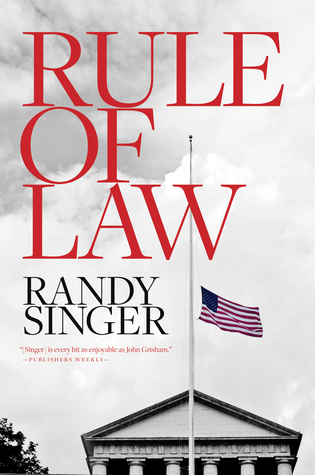 Rule of Law (2017) by Randy Singer is a highly engaging stand alone suspense novel. This novel is due to be released on September 5, 2017. This novel will come in all forms including eBook, and is roughly 450 pages in length. I received a free copy of this novel through Litfuse Publicity Group. This has in no way influenced my opinions of this book. All opinions expressed in this review are my own. With a full-time job and a rambunctious five year old, this novel took me six days to read. I give this novel 5+ STARS. This story is a Contemporary Christian Suspense novel. It deals with American politics and the American military, specifically the Navy SEALs.

What did the president know? And when did she know it?

For the members of SEAL Team Six, it was a rare mission ordered by the president, monitored in real time from the Situation Room. The Houthi rebels in Yemen had captured an American journalist and a member of the Saudi royal family. Their executions were scheduled for Easter Sunday. The SEAL team would break them out.

But when the mission results in spectacular failure, the finger-pointing goes all the way to the top.

Did the president play political games with the lives of U.S. service members?

Paige Chambers, a determined young lawyer, has a very personal reason for wanting to know the answer. The case she files will polarize the nation and test the resiliency of the Constitution. The stakes are huge, the alliances shaky, and she will be left to wonder if the saying on the Supreme Court building still holds true.

It makes a nice motto. But will it work when one of the most powerful people on the planet is also a defendant?

I have never read a novel by Randy Singer before, and I am not a fan of the political/military suspense drama. It is not traditionally a genre I go for. I know our world is crazy. I know politicians are corrupt. I know the legal system fails more so than it succeeds.  I know the men and women who serve in our military are hard-working, over-used, underappreciated, dedicated servicemen who deserve way more respect and recognition than we, Americans, give them. I know the news industries are severely corrupt entities. I know that our founding fathers would look upon America today with shame and anger and frustration. Because I know all of this, and because I feel so powerless by the direction this country has taken, I don’t tend to read books that focus on these issues. I tend to read novels that allow me to escape my real world. BUT, my husband is a big Randy Singer fan, so I requested to be a part of this blog tour so my husband and I could have a shared reading endeavor. My goodness, am I glad I joined this blog tour! Randy Singer is an amazing writer, and Rule of Law is a story that needs to be read by every American today.

The characters in this novel are fantastically written. Singer can write the male SEAL persona as well as he can write the young, pretty, up and coming female litigator, or the wizened, older male lawyer who plays with the rules a little too close to the line. Singer’s characters are realistic and authentic, and not stereotypical. Singer has a talent for getting the reader to see into the heart of each of his characters. I felt terrible for the wives and mothers who lost their brave SEAL sons, but I felt equally terrible for the Middle Easterners in Yemen who lost their children to corrupt drone strikes. A loss of life is always wrong when the taking of that life is done with corrupt, evil intent no matter what side a person is on. My heart bled out hard for the characters in this novel.

This novel got me on all emotional levels. I thoroughly enjoyed the legal aspect of this story. It is fascinating just how complicated we have made our legal system. It is no longer a matter of fighting for justice. It’s simply become more about what law a person can get around so they can win their case. I found myself often frustrated and angry by the injustice of our legal system. This novel also brings to light the age-old question of just how much power should we give to our government? We now have the ability, as a nation, to kill people without ever having to leave the comfort of Washington D.C. What I didn’t realize while reading this book is just how much wiggle room the President has concerning how he/she can use the CIA. This novel brings up a very scary point that checks and balances need to apply to all areas of government, not just to the three original branches. I am definitely walking away from this novel shaken to the core. I don’t subscribe to conspiracy theories, but I truly do believe that caring for and about the American people is nowhere on our government’s priority lists.

Rule of Law is a story that will stick with me for a long time. There are issues covered that are really scary. I fear the American people have become so paralyzed by 9/11 and terrorist attacks that we have blindly given up a huge majority of our basic human rights to a government willing to gain more power under the banner of “American safety.” I am afraid that now Americans are in too deep; we have given too much power to agencies like the CIA and NSA all for the sake of our “safety.” And, shame on us. If we believed and trusted in God as a nation, as our forefathers set as precedent when founding this nation, we would not be in the mess we are in today. America gave up God and this is our consequence. Our leaders no longer see life as precious, as an inalienable right. Now that we have the power to kill from the safety of our own capitol, or from some control room hundreds of miles away from the target, the government sees life as expendable. We have lost our conscience, America.

Rule of Law is an amazing novel. I highly recommend reading this story immediately. There is so much more to this story that I did not even touch on in this review, but I don’t want to risk a spoiler. Get this novel when it comes out, read it, and then come back to my review and leave a comment. This is a novel that begs for a book club to discuss it to pieces!