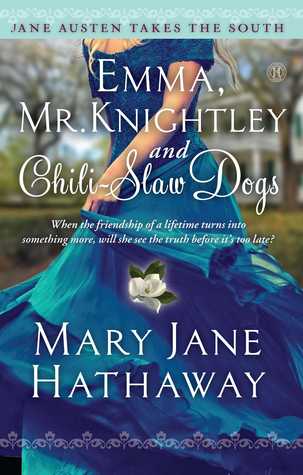 Emma, Mr. Knightley and Chili-Slaw Dogs (2014) by Mary Jane Hathaway is the second book in the Jane Austen Takes the South series. The novel comes in all forms including eBook, and is 291 pages in length. With a full-time job and a precocious five-year old at home, this novel took me three days to read. I give this novel 3 STARS. This book is a Contemporary Christian Romance.

Here is the back-cover blurb:

Caroline Ashley is a journalist on the rise at The Washington Post until the sudden death of her father brings her back to Thorny Hollow to care for her mentally fragile mother and their aging antebellum home. The only respite from the eternal rotation of bridge club meetings and garden parties is her longtime friend, Brooks Elliott. A professor of journalism, Brooks is the voice of sanity and reason in the land of pink lemonade and triple layer coconut cakes. But when she meets a fascinating, charismatic young man on the cusp of a brand new industry, she ignores Brooks’s misgivings and throws herself into the project.

Brooks struggles to reconcile his parents’ very bitter marriage with his father’s devastating grief at the recent loss of his wife. Caroline is the only bright spot in the emotional wreckage of his family life. She’s a friend and he’s perfectly happy to keep her safely in that category. Marriage isn’t for men like Brooks and they both know it…until a handsome newcomer wins her heart. Brooks discovers Caroline is much more than a friend, and always has been, but is it too late to win her back?

So, I don’t hate this book, but I definitely don’t love it. Let me begin by explaining that I am not a fan of Jane Austen’s Emma. I know…gasp! How can this be? My issue with Emma is Emma. She drives me insane. She is a busy-body who thinks she knows everything but doesn’t know anything. And, she almost ruins peoples’ lives because she thinks she knows what is best for everyone. I find her to be an immature and selfish character. And, I always feel SO badly for Mr. Knightley. It’s plain as day that he is in love with Emma, but she is so focused on her point of view she can’t see anyone’s reality. Mr. Knightley is one of the best heroes in Regency fiction…heck, in any era of fiction. Austen made him a knight in shining armor. It’s hard not to love him!

The main characters in this novel are Caroline and Brooks. Caroline is the “Emma” character and Brooks is “Knightley.” Just as in Emma, Brooks is an amazing guy. He pays attention to detail. He is sweet, kind, and compassionate. And, he absolutely loves Caroline. In this book, Brooks and Caroline have been best friends since birth, so it does take him a little while to realize his feelings for Caroline are more than just brotherly-best friend feelings. I do like how Hathaway develops Brooks’s character. He feels very realistic and candid. And I feel so badly for him when he realizes he may have ruined his chance at real love. I definitely root for Brooks like I root for Mr. Knightley.

Caroline plays the “Emma” character perfectly. She does mean well, but she has blinders on that she doesn’t realize she has. For example, there is a sweet, poor, young girl in the novel, Lexi, who has just graduated high school. Lexi received a scholarship to college and plans to get a degree in accounting. She wants to use that degree to help better the lives of herself and her father. Enter Caroline who throws a wrench into that plan because she thinks she knows better. Lexi is a fantastic artist. Caroline convinces Lexi to pursue her artistic talents and drop the accounting plans because, according to wealthy, elite Caroline, no one should be forced into something they don’t love. As a high school teacher at a Title I school, and a mother, I wanted to scream at Caroline for jeopardizing the future of this young, impressionable girl. Caroline has pretty much had life handed to her on a silver platter. Foregoing a prudent choice in order to chase dreams is possible to do when you are rich. When you are not rich, you have to do the smart thing to survive. Just as in Emma, Caroline almost ruins the life of a young, impressionable, poor girl.

One issue with this novel is the focus on Brooks’s parents, specifically his father. It is made a BIG deal throughout the entire book that Brooks’s parents had an unhappy marriage. Never does the reader get an understanding of why the marriage was unhappy. We are just told they bickered and fought a lot. But, we are never told why they bickered and fought a lot. There is zero backstory. At the beginning of the novel, the reader is told that Brooks’s mother had died about a year prior to the start of this book, and dad is so devastated he has basically stopped eating and holed himself up in his study. The reader is never told why dad is so devastated. Am I just supposed to assume he feels guilty for the supposed bad marriage? I don’t know. I kept waiting for something. Some answer to explain how the marriage was so bad, and some answer as to why the dad was so devastated. But the explanation never comes. It left me feeling dissatisfied. If Brooks hadn’t made it a big deal (he brings it up ALL the time), I could have let it go, but he does make it a big deal, so I need answers.

I do realize that Ms. Hathaway has written her characters exceptionally well. I am clearly having a visceral reaction to them. I really do appreciate that about this novel. Don’t not read this book because I don’t like Emma. That has clearly colored my read of this novel. It is a very well written book. I was never bored reading it. In fact, the best part of this book is Brooks and his grandmother. She is hilarious, and it is clear she dotes on her grandson. I flew through their pages and wanted more! If you love Emma, you will love this modern take. If you have never read Emma, you will more than likely love this book. I do recommend the novel. Just for me, there were moments that left me needing more.

If Emma, Mr. Knightley and Chili-Slaw Dogs sounds like a book for you, check out my Book Giveaways page!