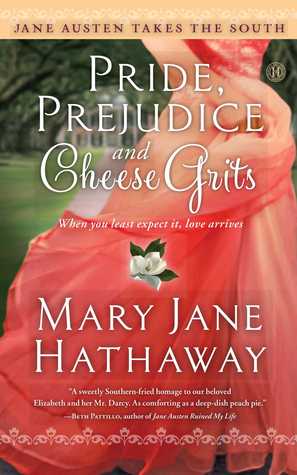 Pride, Prejudice, and Cheese Grits (2013) by Mary Jane Hathaway is the first book in the Jane Austen Takes the South series. The novel comes in all forms including eBook, and is 352 pages in length. With a full-time job and a precocious five-year old at home, this novel took me less than 24 hours to read (because it is SO much fun!). I give this novel 5+ STARS. This book is a Contemporary Christian Romance.

Here is the back-cover blurb:

Shelby Roswell, a Civil War historian and professor, is on the fast track to tenure; that is, until her new book is roasted by the famous historian Ransom Fielding in a national review. With her career stalled by a man she’s never met, Shelby struggles to maintain her composure when she discovers that Fielding has taken a visiting professorship at her small Southern college.

Ransom Fielding is still struggling with his role in his wife’s accidental death six years ago and is hoping that a year at Shelby’s small college near his hometown of Oxford, Mississippi, will be a respite from the pressures of Ivy League academia. He never bargained for falling in love with the one woman whose career — and pride — he injured, and who would do anything to make him leave.

When these two hot-headed southerners find themselves fighting over the centuries-old history of local battles and antebellum mansions, their small college is about to become a battlefield of Civil War proportions. With familiar and relatable characters and wit to spare, Pride, Prejudice and Cheese Grits shows you that love can conquer all…especially when pride, prejudice, love, and cheese grits are involved!

I thoroughly enjoyed every page of this book! I think it a very sweet, fresh, modern take on Austen’s amazing novel, Pride and Prejudice. Do not be fooled by the sort-of low rating on GoodReads. This book is well worth the read.

Shelby Roswell is the main character, and the narration is 98% told through her point of view. She is a wonderfully written character: she is feisty, intelligent, funny, slightly geeky, and a woman who tries desperately to seek after God’s heart. She speaks truth no matter the cost, and this does burn her several times. And, she truly tries to do the right thing in every situation. There is a moment towards the end of the novel where she discusses forgiveness with Ransom. It is one of my most favorite chapters in the novel, and a great reminder that we will never truly find God’s peace if we are adamant to hold on to hurt and griefs and shame. God forgives and forgets, and we need to do the same! I really loved Shelby. To me, she is a genuine, believable character and I enjoyed watching her story play out!

The opening scene where Shelby meets “Mr. Darcy” face to face is brilliantly written! Let me set the stage; I promise, no spoilers. Shelby is an assistant professor at a small Southern college called Midlands. Specifically, she is an American Civil War historian. Shelby has recently published a 56-chapter tome on the Civil War. College is a dog-eat-dog world of publish or perish. Colleges establish their reputations based on the prestige of professors who write well-reviewed texts. So, when the leading Civil War historian writes a scathing review of Shelby’s latest work, she is angry, hurt, and ready to fight! And, this leads to chapter one where Shelby and Mr. Darcy, I mean Ransom Fielding, meet for the first time. Sparks definitely fly!!! What ensues is hilarious, and really captured my reading interest. I just had to see how it would all play out.

Ransom Fielding is a really great character. His version of Mr. Darcy is very well played. Ransom is a widower. His wife was killed in a car accident six years prior to this novel. A year prior to the accident, he and his wife had a miscarriage and lost their baby. He has sworn never to date anyone who could lead to a real relationship because he never wants to be so hurt ever again. He is also extremely angry at God for allowing all this needless pain to happen. When he meets Shelby for the first time, a real, faith-filled woman of substance, he knows he is in trouble. At first, he tries everything in his power to be standoffish and ignore her. But, this proves hard to do as he is incredibly drawn to her. Ransom is a great hero. He is intelligent, handsome, wounded, and prideful. He is exactly the kind of character women swoon over. He definitely reminded me of a Mr. Darcy or Mr. Rochester, but not overtly so. He is definitely his own character just as much as Shelby is.

I had never heard of Mary Jane Hathaway before, and I had no knowledge of any of her books. I just happened to see the cover to this book on the sale page at ChristianBook.com. According to her GoodReads page, Mary Jane Hathaway is the pen name of an award-nominated writer who spends the majority of her literary energy on subjects unrelated to Jane Austen. She is a homeschooling mother to her six young children who rarely wear shoes, and she’s madly in love with a man who has never read Pride and Prejudice. She holds degrees in Religious Studies and Theoretical Linguistics, and has a Jane Austen quote on the back of her van. She can be reached on Facebook at “Pride, Prejudice, and Cheese Grits” or her regular author page of Virginia Carmichael (which is another pen name, because she’s just that cool). I am very glad that I found this author and plan to read more of her works!

If Pride, Prejudice, and Cheese Grits sounds like a book for you, check out my Book Giveaways page!