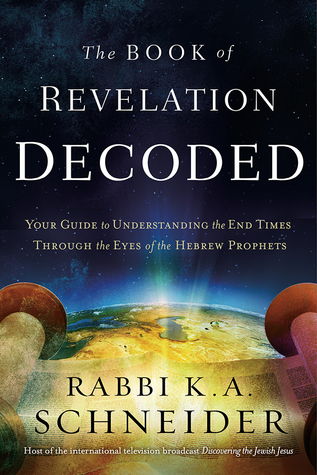 The Book of Revelation Decoded: Your Guide to Understanding  the End Times Through the Eyes of the Hebrew Prophets (2017) is a stand-alone non-fiction text written by Rabbi K. A. Schneider. Rabbi Schneider is a Messianic Jewish man who is an evangelist, and the leader of the Lion of Judah World Outreach Center in Toledo, Ohio. This non-fiction text comes in all forms including eBook, and is roughly 256 pages. With a full-time job and a five-year old at home, this book took me ONE day to read. I received a copy of this book through NetGalley; all opinions expressed in this review are my own. I give this non-fiction text 2.5 STARS.

Rabbi K. A. Schneider decodes the book of Revelation, showing how the end-time events prophesied in the New Testament book correspond with the teachings of the Torah and the Hebrew prophets. You will discover how the Passover foreshadows the great tribulation, and what the Hebrew prophets reveal about the anti-Messiah, Armageddon, hell, the return of the Messiah, the millennial kingdom, heaven, and much more. As the world grows darker and darker, many people have a sense of impending doom. This book will teach you what to expect during the last days and how to stand firm in Christ even in the face of opposition.

I want to begin by saying that I was completely misled by the title of this book. I believed when I received this book that I was getting a book steeped in research, both Biblical and Hebraic. I believed that this book would go through the 22 chapters of Revelation, and, through a Hebraic lens, would give a thorough explanation of those 22 chapters. With the subtitle alluding to the Old Testament prophets, I believed I was going to get a thorough account of the prophets and God’s Words spoken through these prophets to help explain Revelation. NONE of this is what I got. What I got is one man’s — who just so happens to be Jewish and Christian — ideas on what he thinks the end days will look like based on how he has read and studied the books of the Bible. To say that I am disappointed by this book would be a gross understatement.

I am an English major. I have two advanced degrees in Literature. None of this really matters except to say that I know research. Research is my passion. I can pour over a Bible passage, or book, for days researching for hours one or two words or concepts. The research in this book is basic at best. When I saw that a Rabbi had written this book, I was so excited because I thought, “Yes! A Hebraic expert will delve deep into Revelation and help me understand things I can’t really understand because I am not solid on Jewish customs, the activities that take place during the Feast Days, or the Hebrew language!” I believed I was going to get word studies and explanations both in Hebrew and Greek to help my understanding of Revelation. I thought Rabbi Schneider would touch on the Feast Days and illuminate how Jesus’s first coming beautifully fulfilled the Exodus and Passover, and how the Fall Feasts (Yom Teruah, Yom Kippur, and Tabernacles) will be fulfilled by HIS second coming. That does not happen in this book.

Let me give an example of the level of research you get in this book: “Some rabbis claim it was the angels, but the rest of Scripture proves the Lord was addressing the relationship existing within the triune Godhead” (50% through text; my emphasis). WHAT?! Are these secret rabbis? Who are they? Is it a famous rabbi like Gamaliel, Rambam, Hillel, or Akiva? Why is this even in the book if it is not going to be explained? This is research?!? This is just one example where the research is less than basic. Don’t even get me started on his inability to fact check. At the 41% mark in the text, Rabbi Schneider uses the films Gladiator and The Lord of the Rings to make a point. The point he was making using the movies is totally fine, BUT he got a detail in Gladiator wrong. You’re probably saying to yourself, “Who cares?” I know, it’s dumb, but I saw Gladiator in the theater 4 times. I owned it for many years and watched it often, so I know the movie. It’s a minuscule detail that is incorrect, but what bugs me so much is the surface level at which this book is written. This one stupid mistake took me out of the text completely because it is a stupid mistake.

Rabbi Schneider makes a compelling case when he uses the Exodus as an example of when the Bride will be taken up to meet Jesus. He believes that the Bride of Christ will have to go through the majority of the Tribulation just as the ancient Israeli slaves had to endure the plagues of the Exodus. He believes the rapture will occur right before the 7th trump in Revelation. He is calling this “the last trump.” Schneider does give a lot of verses from the Old and New Testament that he feels support this idea. BUT, anyone can pull verses from the Bible to make things fit. That is what it feels like to me. Again, I say, where are the word studies in Hebrew, the cultural understandings, the feast explanations that actually support and link this idea to Revelation?

There is not a single mention of God’s Feast Days and their importance to the comings of Christ. Not ONE! Yes, God is a God who loves chiasms, coming full circle, and measure for measure, but I believe that Jesus’s first coming exactly, perfectly fulfilled the spring feasts: Passover and Pentecost. I think that His second coming will exactly, perfectly fulfill the fall feasts as mentioned above. I think the Bride is a small, special remnant of Christians who truly know Jesus as He really is who will be raptured and prepared as the Bride (like Esther) during the Tribulation period. I do think saints will be left on Earth for a specific purpose during the tribulation, but these saints are not the Bride. I believe these are the guests at the wedding feast as described in Revelation 19. Now, I admit that I could be totally wrong. No one totally knows God’s plan for the end days except God. The point I am trying to make here is that what I have just finished writing here are my opinions. I can back them up with verses from the Bible, but they are my opinions and feelings on the matter. And, that is what I feel like this book is: it is just one man’s opinion.

I believe wholeheartedly that the Bible is one book. There are not two parts to the Bible; there is one book written by God through man. I believe that to understand Revelation, one absolutely must know everything in the Tanakh. Jesus is found on page 1 of the Bible, and on every other page after until the end. What I appreciate the most in this book is Rabbi Schneider’s repeated insistence that the Bible is ONE book. And, he does make some really good points about being ready for the end times and Jesus’s second coming because we don’t want to be caught sleeping like the five foolish virgins. But this book does not go through Revelation as I had hoped. I am a little disappointed in this book and cannot recommend it. I have no more insight into Revelation than I did before I began reading this book.