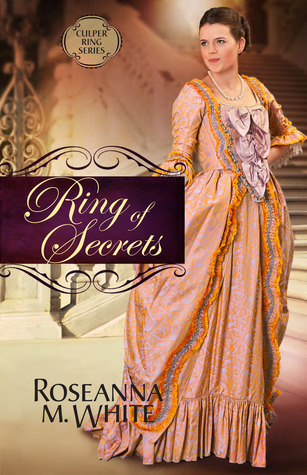 Ring of Secrets (2013) by Roseanna M. White is the first book in the Culper Ring series. This novel comes in all forms including eBook, and is roughly 352 pages. If you purchase this novel from Roseanna’s website, she will autograph the book for you! Her prices are exceptionally reasonable. If interested, check out her store at  http://www.roseannamwhite.com/shop. With a full-time job and a five-year old at home, I was able to read this novel in one week. I give this novel 4 STARS. It is a Christian Historical Romance/Spy novel set during the American Revolutionary War.

Overall, I did enjoy this novel, but it moved slowly for me. I am not entirely sure why it took so long for me to read, but I could put this book down. There are many positives to this novel: I love the characters, the writing is flawless, and the action is there. But, for me, there were negatives. I think my problem stems from all the constant falseness and lying. I understand why the characters do what they do in this novel, and there is no judgement there. They really did have to behave how they did for very important reasons. I think I am just not a fan of spy novels. When the novel focused on the relationships, I couldn’t put the book down, but when the characters were being fake I just couldn’t get into it.

Here is the novel’s premise (from the back cover):

Winter Reeves is an aristocratic Patriot forced to hide her heart amid the Loyalists of the City of New York. She has learned to keep her ears open so she can pass information on British movements to Robbie Townsend, her childhood friend, and his spy ring. If she’s caught, if she’s hung for espionage…well, she won’t be. Robbie has taught her the tools of the trade: the wonders of invisible ink, drop locations and, most importantly, a good cover.

Bennet Lane returns to New York from his Yale professorship with one goal: to find General Washington’s spy hidden among the ranks of the elite. Searching for a wife was supposed to be nothing more than a convenient cover story for his mission, but when he meets Winter, with her too-intelligent eyes in her too-blank face, he finds a mystery that can’t be ignored.

Both are determined to prevail at any cost…and each is committed to a separate cause. Will God lead them to a shared destiny or lives lived apart?

When I first met Winter, she seemed a vapid, boring, rich girl who couldn’t put two thoughts together…or could she? Winter actually says some of the funniest things in this novel. That part did have me laughing out loud. When she was faking her stupidity, she would often use words incorrectly, which is hilarious! But it also frustrated me that she had to act so dumb when she is clearly not.

When I first met Bennet, he appeared the typical Yale man: stuffy, nerdy, and haughty…or was he? Turns out neither of the characters are who they seem to be at the beginning of this book. One is a spy for the American Patriots, and the other a spy for England…or is he?! So much intrigue. I think this may be where my issue with this novel comes in to play. The main characters never really could tell each other the truth about who they were, so how could they really fall in love? How could that part of the story really work? Bennet is smart enough to know the whole time that Winter is hiding her true self from him. The moments in the story when she would show Bennet little bits and pieces of who she really is are the best parts of this book.

There is one moment in the book that I just could not buy, and this takes place near the 50% mark on pages 172-174. Archie, Bennet’s brother, sees Winter in a section of town where the prostitutes work and the saloons sell their liquor. It is named Holy Ground because it used to be where the church was before it was burned down four years previously. This is a place Winter should not be, but because of someone evil she ends up getting hurt and tossed into Holy Ground like a piece of trash. Winter is clearly hurt and in need of help. Archie does eventually take her home, and while in the carriage together he realizes that Winter is more than she seems. A little later down the page, Archie goes home and sees Bennet. Instead of telling Bennet that he just rescued Winter from harm, he tells Bennet that he has been wrong about Winter, that Bennet is correct when he tells everyone that Winter is actually smart. What?! There is no mention of her being wounded. There is no mention that Archie found her in Holy Ground. Nothing. Just that Bennet has been right all along about Winter. This part just does not make sense. If I had seen my brother’s love interest in a disreputable part of town with a head wound, I would have said to my brother something along the lines of, “You better go see your girlfriend, she is hurt badly and I found her in the wrong part of town.” This one particular part really threw me for a loop. I have read many of Ms. White’s novels and have never come upon an unrealistic moment like this before.

I do love the prayers the characters say in this novel. It is clear Winter loves God deeply. She has a genuine faith, and turns to God often, and this eventually leads Bennet to do the same! I really love that aspect of the novel. And, the characters make excellent statements that really struck me as I was reading. One of my favorite quotes comes from Winter: “She must find a way to be like Viney. ‘Twasn’t enough to keep from being found guilty in the eyes of man. She must focus on remaining innocent before the Lord, no matter how others may judge her.” This is a great quote, and a great reminder. I must walk my path with God constantly in mind. I must walk my path so that I am innocent before God. This reminds me of Proverbs 29:25: “The fear of man lays a snare, but whoever trusts in the Lord is safe.”

If you enjoy the American Revolutionary time period, and you like spy novels, then I highly recommend this novel. The action is solid. The characters are very well written. And, the weaving of actual historical people and places and events with Ms. White’s fictional world is seamless. I do feel this novel is a solid 4 STARS out of 5.